By V F Murphy
Diagram of the Lymphatic System

Structure, distribution, function
The lymphatic system forms a one way flow system towards the heart. Through this system flows lymph, which starts from blind ended capillaries. The capillaries are very permeable, and feature a loose overlap feature, where with the aid of small anchoring filaments the vessel can take large particles and stay open where the external pressure is greater. This causes problems however, as the vessel also carries large particles, such as viruses, pathogens, and cell debris, hence can carry infection through the body. 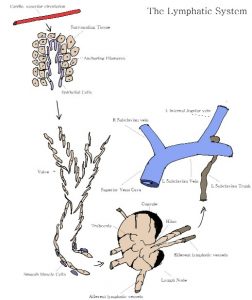 The capillaries soon aquire small one way valves, which ensure flow is only in one direction. The fluid is further moved through the system by means of compression caused by general skeletal muscle movements, including pulmonary inspiration.
Composition of lymphoid tissue
Lymphoid tissue is a whiteish tissue containing antibodies and immune cells.

Basic structure and cell population.
Major lymphoid organs:
Lymphatic capillaries are 10-50 micrometres in diameter, and are refered to as the initial (or terminal) lymphatics. They start from a blind sac, or from anastomising vessels. The endothelium is a single layer, with an incomplete basement membrane. There is a gap junction of 14nm, which makes it highly permeable to plasma proteins and carbon particles. The cell junctions are oblique, forming the flap valves noted above.

...the vessel also carries large particles, such as viruses, pathogens, and cell debris, hence can carry infection through the body
V F MurphyAnchoring filaments have been observed which keep the capillaries open at revers pressure gradients from the surrounding interstitium. The cappillaries then lead into collecting vessels, which flow into the afferent lymph trunks. Semi lunar valves in these larger vessels direct flow centrally, and the vessel gains a Smooth Muscle Cell layer and connective tissue.
Function
There are a number of other lymphatic organs which form semi-independant parts in relation to the main system, but the lymphatic circulation itself leads from a microcapillary filtrate from interstitium throughout the body, back into the blood at the L and R subclavian veins. Without this recirculation the cardiovascular system would stop in time, and massive swelling (oedema) would take place.

Resources and references on Medical Engineering